WordPress 3.5 is almost upon us, and I was excited to learn that my Sort Query by Post In plug-in had been folded into core, thanks to a ticket I opened and submitted a patch for some time ago. Sort Query by Post In allowed developers to return posts from a post query (WP_Query) in the order designated using the post__in parameter.

Now that identical functionality is in core, I wanted to update my plug-in to automatically disable itself – with a notice – for users running 3.5 or newer. This code would also prevent the plug-in from being activated if installed on 3.5 or newer. Surprisingly, there seemed to be a dearth of good tutorials, so I came up with my own solution.

Trick #1 – which isn’t really that tricky – was getting the plug-in to deactivate itself, and notify the user of the change. Trick #2 – a bit more tricky – was preventing new activations without showing an ugly and scary warning message on the plug-in activation screen.

Here’s how it works:

So let’s break this down a bit.

You can retrieve the current WordPress version using get_bloginfo(‘version’) (or the global $wp_version). If you’re not running a final / stable release (i.e. a beta or trunk), that doesn’t return just a number, but something like “3.5-beta2-…”. PHP’s floatval will take care of stripping that down to a comparable numeric version, and we can use PHP’s version_compare to reliably compare against the version number we’re looking for.

If we pass the “deactivate / don’t run this” test, I than recommend another test to check the current user’s right to activate_plugins (only administrators, out of the box). This will ensure that Joe subscriber doesn’t see a plug-in deactivation message, and that the next administrator to log-in does.

I add two hooks. The admin_init hooks runs when the admin dashboard is loaded; this will ensure it doesn’t deactivate until a message can be shown, and also ensures that plug-ins have been loaded up before we run our deactivation code. The callback simple executes WordPress’s deactivate_plugins function.

The second hook,  admin_notices, will allow us to show a notice / message in the admin, and also conveniently runs right before the code that generates the “Plug-in activated” or error message generated by activating a plug-in. In the callback, I echo out the desired, formatted notice, and, should it be set (translation: should the administrator have just activated the plug-in), unsets the $_GET parameter (activate) that core code checks to determine whether and what message to show after attempting to activate a plug-in.

The result is a clean deactivation (even if the plug-in was just activated), with a clear message! 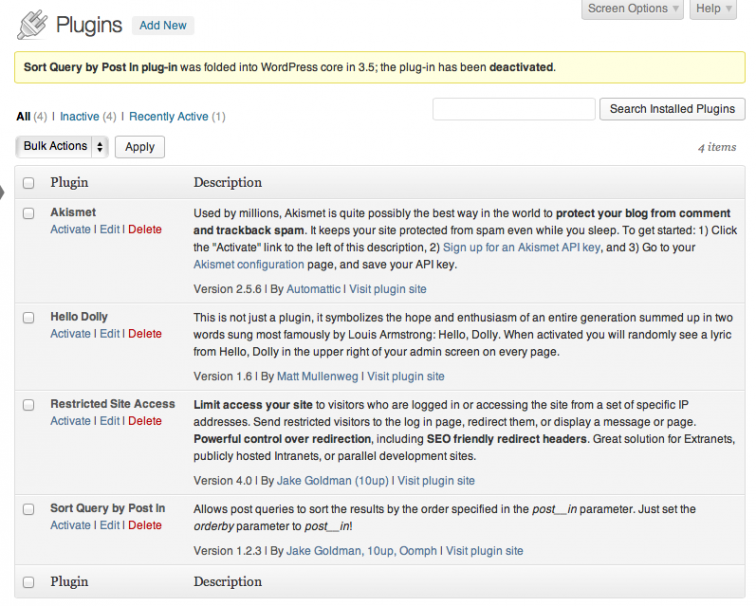