Putting problem solving before technology often means figuring the technology out – sometimes as we go. From push notifications and search to standardizing local development, we’re most proud of contributions that advance markets and platforms, not just 10up.

Months ago, WP Engine, a market leader in managed WordPress hosting, reached out to us for candid feedback with an eye toward the platform’s future. The Labs team was determined to invent not only the future of WP Engine, but the future of WordPress hosting; to be as disruptive as WP Engine was in its earliest days. From better hardware and developer tools to bleeding edge performance technology, the vision was compelling, and it was clear that from CEO Heather Bruner to Founder & CTO Jason Cohen, they were all in.

Its 10up’s position that a rich, forward-looking ecosystem of managed hosting choices is vital to the success of a web platform; we’re only as strong as the weakest part of our stack. Membership, integrated social engagement – even e-commerce – are increasingly entangled with content and publishing, and there are, unsurprisingly, a dearth of hosted WordPress choices tackling these use cases. As the fail-whale oft-reminded us, these cases are very hard to scale, particularly with run-time languages like PHP atop traditional SQL databases. Just ask Facebook. (Actually: we did. Read on.)

WP Engine wanted to tackle this problem. They had us at “do you want to help us build it?”

The result was a several month collaboration, kicking off with ideation and early MVP prototyping at WP Engine HQ in Austin, Texas. The collective team was no holds barred; we weren’t afraid to say “this isn’t good enough” or “the hype doesn’t match reality,” and we were fearless in collectively tackling those obstacles. Facebook’s HHVM team even showed up to help.

This hyper fast, HHVM-powered, geographically redundant platform wouldn’t get its name until a few weeks ago: Mercury.

I nicknamed it WP JetEngine. The average Joe isn’t qualified to fly a jet, and for most trips, your average Jane doesn’t need to pay for a jet. But sometimes you need to move further and faster, and if you’re willing to jump through a few financial and logistical hoops, it’s actually the safest way to travel. 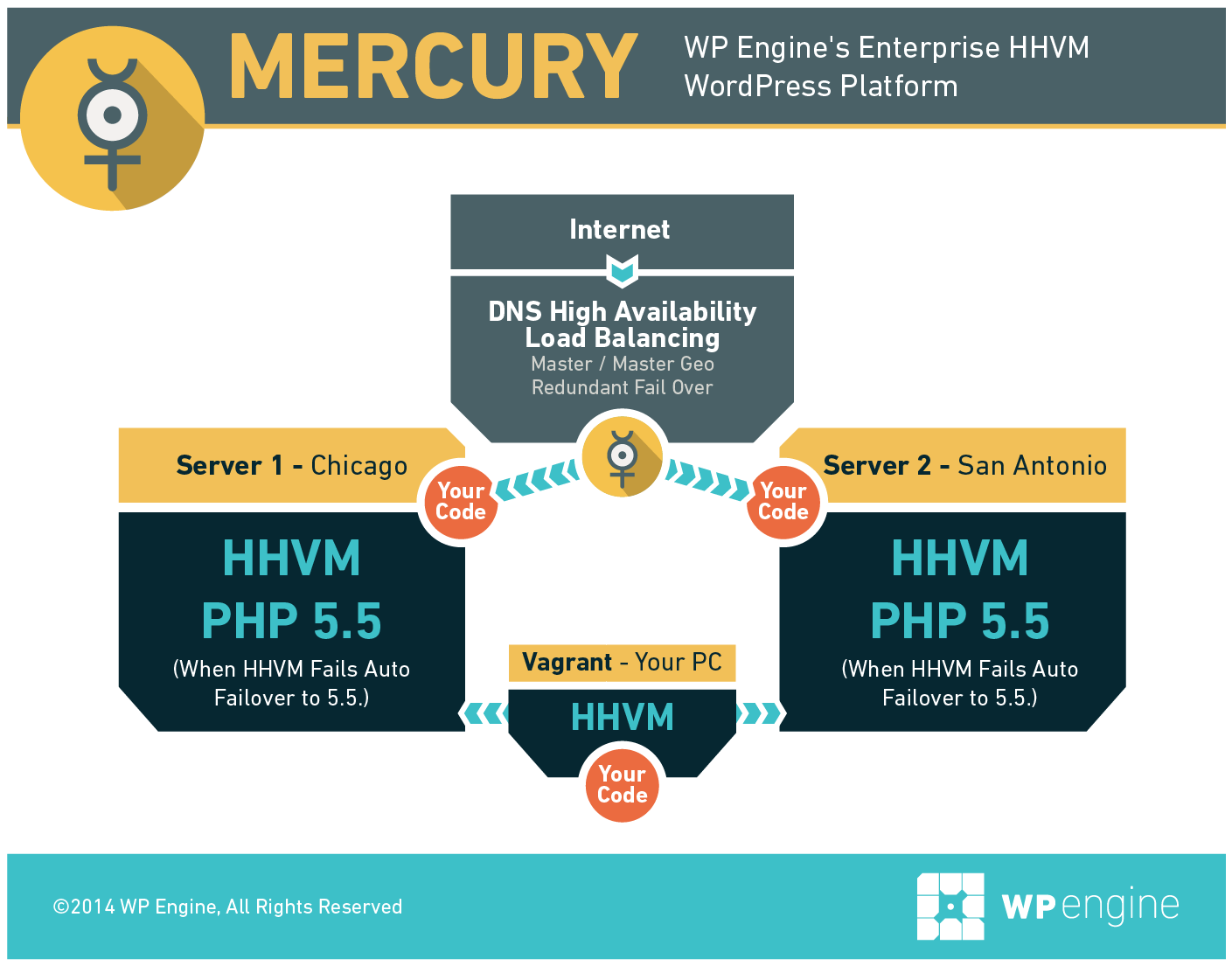 In fact, somewhere along the way, I volunteered this very site as the first test pilot: we’re running on Mercury right now. Our willingness to stand behind the beta reflects our confidence in the platform… and was extra inspiration for our crack systems team to aggressively perform our independent failure and load testing.

Check out more performance highlights from our independent testing in the full press release over at WP Engine, emphasizing our focus on addressing non-traditional high scale use cases.

The WordPress ecosystem has a wealth of managed hosting platform choices, many of whom are great partners to 10up; we’re thrilled to help WP Engine forge a template for the future, and excited by the focus on the growing membership, social engagement, and other “less cache-able” use cases.